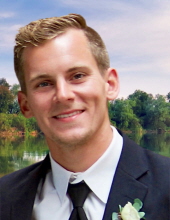 Lee Paulson, 26, of Barrington, IL, died suddenly Thursday, March 15 2018. His friends and family will remember him as the fun-loving, hardworking, kind-hearted young man that he was.

Lee was born July 31, 1991 to Michael and Barbara Paulson of Barrington. After graduating from Barrington High School in 2010, he studied briefly at Harper College, and chose to pursue what he already knew he did best – working with his hands. Earning his CDL at age 18, Lee began working for his father at Alliance Contractors in Woodstock. He went on to hold several jobs which all earned him diverse life experience, including working for a moving company, working as a salesman and personal trainer for a well-known gym, and as the manager of a construction crew fixing up rental apartments. In 2016, he joined his brother at Home Towne Electric in Lake Villa.

Lee was a naturally gifted athlete and sportsman. Growing up on the Fox River, he was a born boater, fisherman, and waterskiier. His parents fondly recall his amazing ability to barefoot waterski by the age of ten. Lee also excelled at dirt biking, motorcycling, skateboarding, snowboarding, and hockey. Lee loved food, and was known for his bottomless appetite and late night cooking skills. He enjoyed making others laugh, and always saw the humor and joy in everyday situations.

Like all of his family, Lee knew the value of a job well done. He was a skilled and steadfast handyman who readily tackled tough home projects for friends and family. He recently demolished a concrete staircase for his parents, and dug a huge system of drainage pipes for a friend’s riverside home in the middle of January. Lee has also proved himself a talented amateur woodworker and ceramicist.

Lee was a loyal and loving son, an admiring little brother, and a treasured friend. He always lit up the room with his smile and sense of humor. Our hearts will forever feel the loss of his absence.

Lee is survived by his parents Mike and Babs, his sister Amanda, and brother-in-law Zach Benkowski. He also leaves behind his loving girlfriend, Morgan Gwinn, grandmother Carma Tucker, and many loving aunts, uncles and cousins. Lee is preceded in death by his brother Matthew, his aunt Cheryl Hardt-Puryear, and his grandparents Ed Hardt, Jean Hardt, and John Paulson.

Condolences may be sent to his family at 8807 Roland Drive, Barrington, IL 60010. In lieu of flowers, his family suggests memorial tributes be directed to the Lee Paulson Memorial Fund.

To leave a condolence, you can first sign into Facebook or fill out the below form with your name and email. [fbl_login_button redirect="https://justenfh.com/obituary/lee-paulson/?modal=light-candle" hide_if_logged="" size="medium" type="login_with" show_face="true"]
×