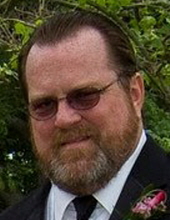 Les Lunsmann, 61, of McAllen, Texas and formerly of McHenry, passed away on January 24, 2018. He was born October 26, 1956 in Wisconsin, the son of Fred and Katherine (Sheehan) Lunsmann. He married Joan Tholen on June 14, 1980 at Our Saviors Church in Jacksonville, IL.
He had a varied career, from road construction to police officer for several departments, undercover narcotics agent with the Illinois State Police, to bar owner of local establishments, most recently Sunnyside Tavern in Johnsburg.
He was a die-hard Cubs fan, a lifelong Blackhawks fan, and a Bears fan, good or bad.
Les centered his life around his family and is survived by his wife, Joan, his son, Luke (Geneva) Lunsmann of Pennsylvania; his daughters, Christina Lunsmann of Georgia and Melissa Lunsmann of North Carolina; his grandchildren, Addison and Liam Lunsmann; his mother, Katherine Lunsmann of Wisconsin; his brothers, Steve and Neal; his sister, Kathleen Phillips; and his mother-in-law, Mary Helen Tholen; in addition to many nieces, cousins, aunts, uncles, and in-laws.
He was preceded in death by his father, Fred; his father-in-law, Roy Tholen, and brother-in-law, Marion (Pete) Phillips.
Friends may gather to visit with his family from 1 p.m. until 3 p.m. Saturday, March 10, 2018 at Justen Funeral Home & Crematory, 3700 Charles J. Miller Road, McHenry, IL 60050. The memorial service will follow visitation at 3 p.m. Saturday in the funeral home.
Memorials in memory of Les may be made to the McHenry VFW Post 4600 or on-line at youcaring.com.
For information, please call the funeral home at 815-385-2400, or visit www.justenfh.com, where friends may leave an on-line message for his family.

To leave a condolence, you can first sign into Facebook or fill out the below form with your name and email. [fbl_login_button redirect="https://justenfh.com/obituary/les-l-lunsmann/?modal=light-candle" hide_if_logged="" size="medium" type="login_with" show_face="true"]
×