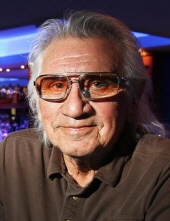 A true visionary and entrepreneur, Mario started his career in Scotland as a Big Band Singer with dreams of becoming famous. Dubbed “Scotland’s Finest Crooner,” Mario soon set his sights on another dream: America. In 1956, at age 21, Mario arrived by ship in Canada, accompanied by only his trusty upright bass and 20 English Pounds in his pocket. He lived there for a couple years, working at the Ford Motor Company in Oshawa, Canada. A few years later, on October 18 (coincidentally, his future wife’s birthday), Mario started a job at the Chrysler Motor Company in Chicago Heights and began the creation of his own American Dream. During this time, Mario was involved in a small theater group where he met the love of his life, Joan. The two married on June 4, 1960 at St. Mary’s Church in Chicago and shortly after started their family.

A devoted husband and father, Mario was a machinist by day and an entertainer by night, singing and playing in top Chicago nightclubs on the weekends. In 1972, Mario opened a recording studio in Chicago on Kimball and Bryn Mawr where he wrote, produced, recorded and released many original songs that were played on the radio.

In 1977, Mario developed one of the very first Mobile DJ and Lighting systems thus giving him credit for being a pioneer in this new field of entertainment. At this same time, he was also a successful Wedding Band Leader along with longtime singing partner, Alan Stevens. While doing all this, Joan and Mario raised three children. In 1983, he started his own manufacturing/machining business, Hi-Tech Manufacturing, with his good friend, Greg Goldfarb. This business is still going strong today.

After retirement, Joan and Mario travelled extensively with their very much-loved Yorkie, Oliver. They would feed him circus peanuts, White Castle Sliders, McDonald’s Happy Meals, and Jelly Beans and he still survived 13 years! In 2012, Mario purchased a large parcel of land in Johnsburg where he rejuvenated an existing hotel and created an all new restaurant, Wave Bar & Grille.

Mario, a man of great charisma, was instantly likable. Everyone who met him wanted to be his friend. Above all, he loved his family and children more than life itself and worked very hard to provide them with a great life. His legacy will live on forever.

Mario was preceded in death by his parents; and his siblings, Antoinetta, Delores, and Fernando.

For those wishing to send an expression of condolence, Mario’s family suggests memorials to St. Jude Children’s Research Hospital by mail at P.O. Box 1000 Dept. 142, Memphis, TN 38148-0142 or online at www.stjude.org/give.html.

Arrangements were entrusted to Justen Funeral Home & Crematory. For information, please call the funeral home at 815-385-2400, or visit www.justenfh.com.

To leave a condolence, you can first sign into Facebook or fill out the below form with your name and email. [fbl_login_button redirect="https://justenfh.com/obituary/mario-arcari/?modal=light-candle" hide_if_logged="" size="medium" type="login_with" show_face="true"]
×