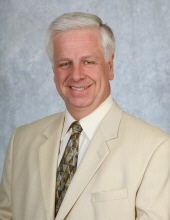 Mark Lenard Justen, age 66, of McHenry, died suddenly Sunday morning, March 29, 2020, at his home. Born August 22, 1953 in Rockford, Mark was adopted by Robert and Collette (Lenard) Justen through Catholic Charities when he was 5 months old.

Mark was raised in McHenry and spent the vast majority of his life as a proud McHenry resident. Mark attended elementary school through Grade 8 at St. Mary’s Catholic School in McHenry, where he learned his beautiful cursive handwriting. He attended freshman and sophomore high school at McHenry East Campus and his junior and senior years at West Campus, where he was active in the sports training program for the football & basketball programs.

Following high school graduation in 1972, Mark attended Indiana State University in Terre Haute to study sports medicine. After three years of study in Terre Haute and a serious talk with his father, he switched his career path. In 1975, Mark moved back to McHenry to join the family funeral home business in 1975 as the fourth generation. Graduating from Worsham College of Mortuary Science in 1976, Mark worked alongside his sister, Krista, who attended Worsham six months earlier, and father, Robert, at the George R. Justen & Son Funeral Home on Route 120 in McHenry. In 1978, after the sudden death of Mark’s and Krista’s mother and Robert’s wife, Collette, Krista left the funeral industry and Robert left the operations and management to Mark.

Taking the mantle as the fourth generation to run the funeral home, Mark worked tirelessly to improve and grow the family business. Early on, he recognized the growing preference for cremation. In 1983, Mark received approval and installed a crematory at the McHenry funeral home, serving the cremation needs for a total of 15 funeral homes in the area. Mark also realized the opportunity for expansion. In 1985, Mark purchased the Wonder Lake Funeral Home from John Freund, and in 1989, he purchased the Round Lake Funeral Home from the MacGillis family. However, true to form, his heart and his focus always stayed in McHenry. After 125 years of continuous operation on Route 120, Mark oversaw the relocation of George R. Justen & Son Funeral Home. In 2008, the business reopened on Charles J. Miller Rd as the Justen Funeral Home & Crematory. Upon opening, the new location featured the largest chapel space of any funeral home in the county. During design and construction, Mark sacrificed his personal retirement accounts to finish the building because serving the needs of the surrounding community was truly his life’s passion. A self-described workaholic, he often would be found at the funeral home nights and weekends, often well into the night, catching up on paperwork.

Service to the community was a central pillar of Mark’s life, and that extended beyond the funeral home. Within the McHenry community, Mark was a member of the fire service for 49 consecutive years. Beginning as a founding member of the McHenry Area Rescue Squad, Mark was an EMT since Jan 10, 1972. In 1983, when the Rescue Squad merged with the McHenry Township Fire Protection District, Mark continued his training becoming a firefighter. In 2000, he became a fire trustee with the McHenry Township Fire Protection District, serving the community in his 49th year of continuous service. As he grew older, Mark expanded his service beyond just the immediate community.

In the 1980’s, Mark joined in disaster mortuary affairs with his state association, the Illinois Funeral Directors Association. Mark served with the Illinois Disaster Response Team before its merger with the federal response unit into the Disaster-Mortuary Operational Response Team (D-MORT). While with D-MORT, Mark was activated to serve on the response teams for several major fatality incidents, such as Hurricane Katrina, American Eagle Flight 4184 crash near Rensselaer, IN, the Bourbonnais train derailment, and his most notable deployment, the World Trade Center terrorist attack on 9/11/2001. He was deployed to NYC over a nine-month period following 9/11. There, he worked briefly with DNA Analysis before being reassigned to Logistics Management for the Office of Chief Medical Examiner, where he helped with the receiving and intake of the remains of the Victims of 9/11. He assisted in setting up the tents and trailers on 30th Street for ancillary offices; inventory management and multiple other duties extending to the outer Borough Offices of the Chief Medical Examiner’s Office. Mark also assisted in setting up Memorial Park which stored the remains of the Victims of 9/11. There, amid the tragedy, he formed life-long friendships with other first responders. He brought his own unique brand of charisma to New York City, attending many retirement gatherings and even coordinating some funerals in the NY area for his dear friends. For the remainder of his life to his NY friends, he was fondly referred to as the “Mayor of 30th Street”, as Mark had a special place in the hearts of many New Yorkers.

Amid all his accomplishments in business and national service, Mark was most proud of his family. His journey as a husband began on Sept. 6, 1986 at St. Mary’s Catholic Church in McHenry, when he married, Nancy Jean Scherwitz. Nancy found ways to clean up the messes Mark often found himself creating. In return, Mark provided companionship and constant conversation, because Mark really never stopped talking, even in his sleep. In their life together, they shared countless trips to Lambeau Field and a love of their dogs, though Mark always loved to pretend that he was not as attached to them as Nancy. They were blessed with two children, Robert born in 1988, and Alex born in 1991. A very proud father, one of the highlights of Mark’s life came when son Robert announced a career change. Robert planned to leave his career in the IT field and joining the Funeral Home to carry on the legacy of the family business. After graduating from McAllister mortuary school in 2016, he joined the funeral home in 2017. Robert quickly learned the business from Mark, and much to Mark’s annoyance, Mark slowly learned a few things from Robert too. When Mark recently ran for the McHenry County Coroner position, he stated if successful, he would leave the family business. He was able to state that with absolute confidence because he knew that he would leaving the business in capable hands. While Mark’s younger son Alex did not choose to join the family business, that never stopped Mark from drafting him to run errands any time Alex was home for the holidays. Mark’s most recent proud achievement as a father was witnessing Alex successfully defend his thesis at MIT to receive his PhD in chemistry.

Mark is survived by his wife of 33 years, (or as Mark would jokingly describe the length of their marriage – “33 years, 204 days, 13 hours and 15 minutes”); sons, Robert Justen of McHenry, and Alex Justen, of Somerville, Massachusetts; his sister and brother-in-law, Krista (Greg Spencer) Justen of McHenry; and sister-in-law, Peg (Jim) Thompson of Cottage Grove, WI; his aunt, Carol (Jim) Wieland of McHenry; and several cousins and six nephews.

He was preceded in death by his parents, Collette Justen in 1978 and Robert Justen in 1988, and aunts, Denise Thompson, Doris Rosing; and uncle, Dennis Justen.

Due to social distancing requirements in place with the COVID-19 pandemic, a drive through viewing for the McHenry community to be able to pay their final respects to Mark will be held at Justen Funeral Home & Crematory on Monday, April 6, 2020 from noon until 6 p.m. All people paying their respects are asked to remain in their cars at all times while in line at the funeral home and follow signage in the funeral home parking lot.

A private funeral Mass will be held at 11:00 a.m. Tuesday at The Church of Holy Apostles, in McHenry. While this service is limited to Mark’s immediate family, live streaming will be available with the link provided on the funeral home website, at www.justenfh.com/mark.  Burial will be in St. Mary’s Cemetery, McHenry.

Lastly, the following are lessons his sons will take forward from their dad’s life:

Be generous. Mark would frequently find ways to give back to community, and often in ways few would notice. He would periodically donate sand to the local beach in Bull Shoals, Arkansas, where he owned a second home. Those who know Mark well know he did not do this because he was one to lay out on the beach for hours. He was far too restless to enjoy even a single long day at the beach. Rather, he donated sand because he saw an opportunity to improve the community, and provide something that people would enjoy. He did not hang billboards around it, or post about it online. He did it, and did it quietly, simply because he could.

Show up for people. While Mark often operated on his own time zone, he knew how and when to show up for people. During moments of crisis, national or personal, he found ways to reach out and care for those who needed him. When his friends or family would have loved ones pass away, he would move mountains to help them. It could be making sure they had the help they needed to plan a memorial, or it could be quietly calling a third party he barely knew, discretely alerting them to check in on their mutual friend during a time of need. No task was too big or too small.

Plan for tomorrow, but enjoy today. In an unusual role reversal, Mark would sometimes grow frustrated with his sons for too much focusing on saving for the future. He wanted them to be responsible, for certain, but he also wanted them to enjoy life. Have that extra dinner with friends. Find ways to show people that you appreciate them today. Most of all, celebrate wherever possible because life is short.

Live bold. Perhaps no man in the city of McHenry enjoyed eggs as much as Mark Justen. He was a stalwart at most breakfast cafes and diners in McHenry. Mark frequented these establishments almost every morning for “an egg”. He enjoyed the fellowship as much as the food. These breakfasts allowed a place and time for him to connect to his community, learn new things, and share his many opinions. His presence in these establishments and in his community in general can be distilled down to a single phrase. What you share with the world is what it keeps of you. He was unafraid to let his friends and family know just how fiercely he loved them. Mark shared a lot with the world, and because of that, it will keep so much of him.

Memorials in Mark’s memory would be greatly appreciated to the Mark Justen Tribute Fund at www.justenfh.com. This fund will benefit local churches experiencing financial hardship during the pandemic, and will allow them to continue programs that benefit the community.  For further information, please contact the funeral home at 815-385-2400, or visit www.justenfh.com.

To leave a condolence, you can first sign into Facebook or fill out the below form with your name and email. [fbl_login_button redirect="https://justenfh.com/obituary/mark-l-justen/?obId=12574414?modal=light-candle" hide_if_logged="" size="medium" type="login_with" show_face="true"]
×