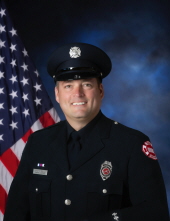 Mark Robert Amore, age 46, of McHenry, died Thursday, April 16, 2020.  Born Feb. 1, 1974 in McHenry, Mark was the son of Wayne and Christine (Dzanbozoff) Amore.  On Sept. 28, 2013, he married Jaimie Tabert in McHenry.   Mark became interested in emergency services at a young age chasing fire trucks through the streets of McHenry on his bicycle.

While he was in high school, he joined McHenry County Emergency Services and Disaster Agency as a radio operator. His first call was to respond to the Plainfield tornado in 1990. He also worked as a dispatcher for the city of McHenry for short time. From then on, he set a goal to become a firefighter paramedic. After high school, he began taking EMT classes at McHenry County College. His first job was with TEK Ambulance Service as an EMT. He went on to paramedic and firefighter classes at MCC. When he turned 21, he joined his father as a member of McHenry Township Fire Protection District, a proud moment for both. He retired from MTFPD as a lieutenant with 20 years of service.

Mark’s love for heavy equipment and machinery took him to attend Local 150 Operating Engineers apprentice program. Upon completion, he was immediately hired by Lake County Grading, where he worked for 21 years. He was currently employed by Pirtano Construction.

He was hired on May 1st, 2001 as a fulltime firefighter/paramedic with the Lincolnshire Riverwoods Fire Protection District, where he was currently employed. As time went on, Mark became active as a mechanic for the district using the skills and knowledge he learned in McHenry.

Mark was a member of the Lake County Underwater Recovery Team as a side scan sonar and boat operator. Mark was an avid boater on the Chain-O-Lakes; he loved the water. In the winter months, his focus turned to snowmobiling, where he never missed going to northern Wisconsin for riding action. He loved the north woods.

Mark was truly in love with his wife Jaimie. She was his ALL. Their kids, Ayden and Brynlee, completed his dream of being a husband and a dad. He was so happy that, as a family, they could all explore boating, snowmobiling, and camping. Those were his most cherished times and made all his long hours of working pay off.

Mark was preceded in death by his grandparents, Robert and Mary Amore and Thomas Dzanbozoff; his uncles, Tom Amore, Terry Amore, and Ray Stevens; and his cousins, Cheri Amore and Tony Williams.

Due to restrictions in place with the COVID-19 pandemic, a drive-through viewing for the public to pay their respects will be held at Justen Funeral Home & Crematory on Tuesday, April 21, 2020 from 1 p.m. until 6 p.m.   All people paying their respects are asked to remain in their cars at all times while in line at the funeral home and follow signage in the funeral home parking lot.   A private funeral

Mass will be held at 11:00 a.m. Wednesday at The Church of Holy Apostles, in McHenry. While this service is limited to Mark’s immediate family, live streaming will be available with the following link:  http://client.tribucast.com/tcid/9804828   Burial will be in St. Patrick Countryside Cemetery, McHenry.

His family has suggested memorials to M.A.C.C. (Midwest Athletes Against Childhood Cancer) at www.maccfund.org or to the Mark Amore Tribute Fund to support the future needs of his children.
Checks can be mailed to Mark Amore Tribute Fund, C/O Justen Funeral Home, 3700 Charles J Miller Road McHenry IL 60050 and they will be forwarded to his family.

For information, please call the funeral home at 815-385-2400, or visit www.justenfh.com, where friends and neighbors may share memories with the family on Mark’s tribute wall.

To leave a condolence, you can first sign into Facebook or fill out the below form with your name and email. [fbl_login_button redirect="https://justenfh.com/obituary/mark-robert-amore/?obId=12731072?modal=light-candle" hide_if_logged="" size="medium" type="login_with" show_face="true"]
×