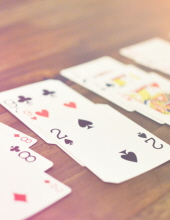 Mary met her future husband, James, when he moved to Florida after retirement. When James’ health began to deteriorate, they moved back to Illinois to be near family and settled in Lindenhurst at the Village of Victory Lakes.

A woman with a happy, warm demeanor, Mary made lots of friends at the Village, and was always ready to sit down and play a game of cards. Her absolute favorite card game was “Hand and Foot,” and she also appreciated a game of rummy or bingo. In addition to cooking, Mary enjoyed sitting in the sun with a good book.

In addition to her husband, James, on June 5, 2010, Mary was preceded in death by her first husband, William Dundy; her parents; her brothers, Jack, Joe, and Ed; and a step-daughter, Patricia Stare.

Inurnment will be at Assumption Catholic Cemetery & Mausoleum.

Arrangements were entrusted to Justen’s Round Lake Funeral Home. For more information, please call the funeral home at 847-546-3300.

To leave a condolence, you can first sign into Facebook or fill out the below form with your name and email. [fbl_login_button redirect="https://justenfh.com/obituary/mary-c-leahy/?modal=light-candle" hide_if_logged="" size="medium" type="login_with" show_face="true"]
×