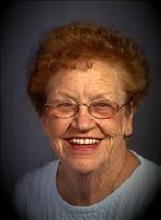 Mary Margaret Scherwitz
April 5, 1926 - June 9, 2009
Print
Email
Mary M. Scherwitz, age 83, a lifelong Fort Atkinson, Wisconsin resident, died Tuesday, June 9, 2009, at her home.
Mary was born April 5, 1926 in Fort Atkinson to C.F.A. and Ada (Zahn) Trieloff, the youngest of seven children. During her childhood, she had serious health problems, and was unable to attend school for extended periods. She persevered and graduated from Fort Atkinson High School with the Class of 1946, two years after her original class.
On Feb. 7, 1953, she married Alvin H. “Al” Scherwitz at Bethany Lutheran Church in Fort Atkinson. She and Alvin made their home on Elsie Street, and raised three daughters, Nancy, Sandra, and Peg.
Mary enjoyed being a homemaker and attending meetings and social functions with Al for their business, Fort Heating Service. Shortly after celebrating their 25th wedding anniversary, Al died at age 54 of injuries sustained in a car accident, and Mary sold the business and continued to raise her youngest daughter, Peg, who was age 11 at the time. Mary often accompanied Nancy and Peg and their families on trips and family vacations throughout the country. She traveled regularly to Bull Shoals, Arkansas for family vacations during the summer.  She and her sister Gladys also enjoyed many local senior citizen bus trips.
She was a loving mother, and very much enjoyed her role as grandma to her eight grandsons. She was fond of animals, often talking about Caesar, her Chow Chow dog; and always welcomed her many “grand” dogs into her home. For over four years, she underwent dialysis three times per week in Fort Atkinson. People who knew her often remarked about Mary’s contagious smile, often with a giggle, and her strong will for life.
She leaves her loving daughters and sons-in-law, Nancy (Mark) Justen of McHenry, IL, and Peg (Jim) Thompson of Madison; eight grandsons, Rob Justen of Fayetteville, Arkansas, Alex Justen of McHenry, Michael and Andrew Simmons of Tennessee, Tim Simmons of Wisconsin Dells, and Adam, Brendan, and Joey Thompson of Madison; a brother and sister-in-law, Carl and Eunice Trieloff of Janesville; a sister, Gladys (the late Raymond) Wolfram of Fort Atkinson, WI; and three sisters-in-law, Evie (the late Bob) Helm of Flint, MI, Gladys (the late Bill) Scherwitz of Fort Atkinson, and Maxine (the late Walt) Scherwitz of Mukwonago; and many nieces and nephews. She was preceded in death by her parents; her husband, Al, on January 8, 1979; a daughter, Sandra Simmons on June 15, 2007; two sisters, Vivian (the late Maynard) Plum; Ruby (the late Dean) Waters; two brothers, Jennings (the late Grace) Trieloff and Warner (in infancy); and sister-in-law, Ruth (the late Omar) Haakenson.
Visitation will be from 2 p.m. to 4 p.m. Saturday, June 13, 2009, at Justen Funeral Home & Crematory, 3700 W. Charles J. Miller Road, McHenry, IL   60050.
Visitation will be from 2 p.m. until 5 p.m. on Sunday, June 14, 2009 at Nitardy Funeral Home, 1008 Madison, Fort Atkinson, WI 53538. Visitation will continue on Monday, June 15, from 10 a.m. until the 11 a.m. funeral service at Bethany Lutheran Church, Fort Atkinson, WI. Revs. Steinbrenner and Wilkens will officiate.
Interment will be at Evergreen Cemetery, Fort Atkinson.
For those wishing to send an expression of condolence, memorials are suggested to Tomorrow’s Hope, 147 W. Rockwell, Jefferson, WI 53549 or to the Humane Society of Jefferson County, W6510 Kiesling Road, Jefferson, WI 53549, or to the Dorcas Society of Bethany Lutheran Church.
For local information call Nitardy Funeral Home at 920-563-2320.
Her family would like to express their sincere gratitude to her doctor, Dr. Donald Williams, for his excellent care and compassion; to Dr. Elangovan and the wonderful, compassionate nurses and technicians at the Purity Dialysis Center; to Danuta “Donna”, her loving caregiver; and to the nurses and staff of Rainbow Hospice for their help and guidance during her final days.

To leave a condolence, you can first sign into Facebook or fill out the below form with your name and email. [fbl_login_button redirect="https://justenfh.com/obituary/mary-margaret-scherwitz/?modal=light-candle" hide_if_logged="" size="medium" type="login_with" show_face="true"]
×