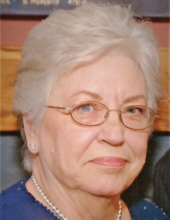 Muriel A. Budzynski, age 78, of Johnsburg, passed away Tuesday, April 24, 2018, at JourneyCare in Woodstock.

She was born May 9, 1939 in Chicago to John F. and Eleanora (Marszalek) Paszkiet. On Sept. 29, 1962, she married Richard Budzinski at St. Robert Bellarmine Church in Chicago. Formerly of Chicago, Muriel and her family summered in Johnsburg for ten years before settling in Johnsburg year-round in 1999. For 39 years, Muriel worked with her husband at the family printing business, RFB Litho Service Inc. in Johnsburg.

Muriel was a devoted member of St. John the Baptist Church in Johnsburg, where she was also active with the Knights of Columbus Council 9167 Ladies Auxiliary. As a young woman, Muriel also worked with St. Vincent de Paul Society in their infant ward.

Muriel’s passion in life was her family. Both she and her husband were very involved as they raised their children. Fondly referred to as “Mr. & Mrs. B” by her children’s friends, they were loved and always welcome when her children had friends over or hosted parties. A talented cook who loved to feed people, Muriel often scoured cookbooks for new recipes to try, although standard favorites were often requested by those who loved her food.

She was preceded in death by her parents; her husband, Richard F. Budzynski Sr. on April 13, 2017; and three brothers, John, Walter (the late Dona) and David Paszkiet.

To leave a condolence, you can first sign into Facebook or fill out the below form with your name and email. [fbl_login_button redirect="https://justenfh.com/obituary/muriel-a-budzynski/?modal=light-candle" hide_if_logged="" size="medium" type="login_with" show_face="true"]
×