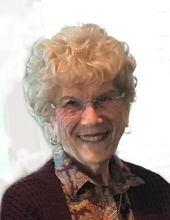 She was born April 23, 1933 in Crystal Lake to Magnus and Theresa (Granath) Nelson. On October 6, 1953, she married her high school sweetheart, Donald J. Butler at St. Mary Catholic Church of McHenry.

Nancy enjoyed working in retail as a young woman at Gladstone’s Department Store in McHenry for approximately 10 years and later at the Smith’s Childrens Clothing stores in Woodstock and McHenry for 5 years. A devoted wife and mother, Nancy’s family was always her most important priority during her lifetime. A loving and adoring grandmother, she cherished spending time with her grandchildren and great-grandchildren. Enjoyments during her lifetime included traveling with her husband, gardening, and taking care of her beloved poodle, Teddy. Nancy was a faithful member of St. Mary Catholic Church in McHenry for the majority of her lifetime.

In addition to her parents, she was preceded in death by her husband, Donald, on October 30, 2011; her grandson, Josh Butler; her sister, June (the late Eugene “Bud”) Oxtoby; her brothers, Harold (the late Frances) Nelson and Leonard (the late Ardella) Nelson; her sister-in-law, Dorothy Ann (the late Jim) Bingley; and brother-in-law, Andrew Butler.

Interment will be in St. Mary Cemetery, McHenry.

For those wishing to send an expression of condolence, her family suggests memorials to the Pioneer Center of McHenry.

To leave a condolence, you can first sign into Facebook or fill out the below form with your name and email. [fbl_login_button redirect="https://justenfh.com/obituary/nancy-m-butler/?modal=light-candle" hide_if_logged="" size="medium" type="login_with" show_face="true"]
×