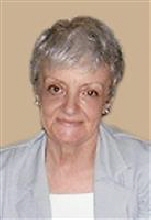 Patricia Catherine Beaudry, age 71, of Round Lake Beach, died Tuesday, August 6, 2013 at Vista East Medical Center in Waukegan.
She was born May 23, 1942 in Chicago to Howard Sr. and Rose E. (Oertel) Simpson. On November 18, 1978, she married Peter L. Beaudry Sr. in Las Vegas, Nevada.
Patricia had been a resident of Round Lake Beach since 1972. She was a substitute teacher at Gavin Central School. Her priority in life was always family first, and she cherished time spent with her children and grandchildren.
Patricia was an avid fan of the Chicago Bears, and always sported her Bears jersey on game day. She also enjoyed the music of Elvis, as well as trips to Wisconsin and Illinois casinos.
She is survived by her children, Kimberly (James) Gutowski of Yuma, AZ, James (Michelle) Caldwell of Winthrop Harbor, and Shari (Scott Slotowski) Witnik of Bristol, WI, a stepson, Peter Beaudry Jr. of Jackson, MI; eight grandchildren, April (Jason) Bell, James (Danielle Moss) Caldwell III, Mark Gerharz Jr., Lanaya (Tyler Fortin) Gutowski, Heather (Ralph Hawkins) Gerharz, Stephanie (Derek Underwood) Gutowski, Kyle Kenna, James A. Gutowski Jr.; a great-grandchild, Conner Burch; and a sister, Lois (Robert) Ritter of McHenry.
She was preceded in death by her parents; her husband, Peter L. Beaudry Sr., on August 19, 2012; a son, Alan Caldwell on May 24, 1976; a sister, Dorothy Jean, as a child; three brothers, Howard Jr., James and LeRoy Simpson; and a stepson, Robert Beaudry.
Visitation will be on Monday, August 12, 2013 from 4 pm until 8 pm at Justen’s Round Lake Funeral Home, 222 W. North Rosedale Court, Round Lake, Il 60073.
The funeral Mass will be celebrated at 10 am on Tuesday, August 13, at St. Joseph Catholic Church, 114 N. Lincoln, Round Lake, IL.
Interment will be in Arlington Cemetery, Elmhurst, IL.
Her family suggests memorials in her name to the NorthShore University Health System for Parkinson’s Research.
For information, call the funeral home at 847-546-3300, or vist www.justenfh.com, where friends may leave an on-line condolence message for her family.

To leave a condolence, you can first sign into Facebook or fill out the below form with your name and email. [fbl_login_button redirect="https://justenfh.com/obituary/patricia-catherine-beaudry/?modal=light-candle" hide_if_logged="" size="medium" type="login_with" show_face="true"]
×