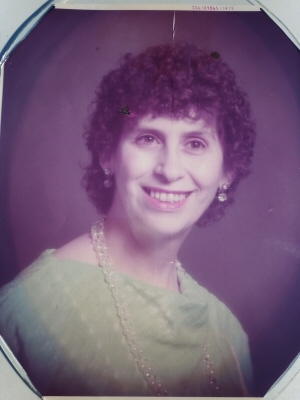 Patricia Elizabeth Bronson, age 77, of Round Lake Park, Illinois, passed away on June 1, 2020, at Advocate Condell Medical Center. She was born on October 25, 1942 to Joseph and Martha (Dewey) Romandine in Chicago Heights, IL. She was united in marriage to Frank Bronson (Vance Franklin Bronson).

Patricia was a giver and helper to her core. She repeatedly and consistently gave everything she had to those in need. She always wanted to help and be a part of whatever task was being done.

In her free time, Patricia enjoyed playing board games like Yahtzee and Scrabble, card games like Rummy 500, and jigsaw puzzles. She also liked bird watching, long walks, shopping, visiting her brothers and sisters, and doing anything with her grandsons.

Patricia was a woman of great faith. She believed in Jesus as her Lord and Savior and that she was saved. She was an Ordained Deacon at Calvary Presbyterian Church. Her spiritual strength and perseverance in overcoming obstacles will be her legacy and an example and motivation to her son, grandsons, and beyond.

The birth of her son and her grandsons were a significant event in her life as she was not able to have any more children later in life.

Her family believes that she would want them to know that “Everything is okay because God takes care of me”.

Patricia is survived by her son and daughter-in-law, Vance & Regina Bronson of Round Lake Park, brother, Victor Romandine, sisters, Martha and Rosie Jackson, and her two grandsons: Vance & David Bronson.

Arrangements have been entrusted to Justen Round Lake Funeral Home. For information, please call the funeral home at (847) 546-3300 or view her obituary on the funeral home website at www.justenfh.com where friends and loved ones may share memories of Patricia on her tribute wall.

To leave a condolence, you can first sign into Facebook or fill out the below form with your name and email. [fbl_login_button redirect="https://justenfh.com/obituary/patricia-elizabeth-bronson/?modal=light-candle" hide_if_logged="" size="medium" type="login_with" show_face="true"]
×