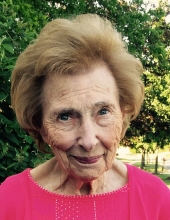 Patricia J. “Nana” Esposito, 93, passed away peacefully on November 15, 2018, at St. Alexius Hospital in Hoffman Estates. She was born in Chicago on June 5, 1925 to John and Harriett (Gwinnup) Clements. Her early years were spent growing up on the South Side of Chicago, where she attended Hyde Park High School, and worked at Carden’s Drug Store. It was here that Pat met her future husband and love of her life, Carmie Thomas Esposito. The two were married on May 5, 1951 in Chicago.

After spending their early married years in Worth, IL, the couple relocated to East Longmeadow, MA. Pat cherished her role as a devoted wife and mother to her four children. The family relocated to the Midwest and settled in Johnsburg, IL, while spending winters in Florida and visiting her daughters in Massachusetts in the fall. She treasured her time traveling with her daughters to Martha’s Vineyard, Rockport, MA, and Ogunquit, ME.

Pat, naturally gifted in all aspects of the home, taught herself gourmet cooking and took her role as family chef seriously, providing meals for all family functions. A faithful communicant of the First United Methodist Church of McHenry, Pat was a dedicated member of the Red Hat Society, First United Methodist Women’s Group. Pat enjoyed needlework and was a participant of many quilt guilds in both McHenry and Florida. While in Massachusetts, Pat volunteered at the Annual Eastern States Exposition (“The Big E”), where she demonstrated her embroidery handiwork in the Creative Arts building. During her time in Florida, Pat volunteered at her church thrift store, loved to watch sunsets at the beach, and found great joy in riding her three wheel bike around the park.

A woman of deep faith with the profound ability to love all around her, Pat will be forever remembered by and in the hearts of all who had the opportunity to know her.

Left behind to cherish Pat’s memory are her children, Karen (Dan Blais) Esposito of Springfield, MA, Kim (William) Carlos of Hampden, MA, Scott (Diane) Esposito of Bartlett, IL, and Tracy Louis of Bartlett, IL; her daughter-in-law, Tracy R. Esposito, who cared for and loved Nana through the years; her grandchildren, Candace, Joseph, Cassandra, Christopher, Nicole, Cory and Alec; her great-grandchildren, Colby, Rowan, and Giavana; her brother, John (Dorothy) Clements, of Calumet City, IL; as well as many nieces and nephews.

In addition to her parents, Pat was preceded in death by her beloved husband, Carmie Esposito, on February 25, 2009.

Interment will be at St. John the Baptist Cemetery in Johnsburg.

For information, please call the funeral home at 815-385-2400, or visit www.justenfh.com, where you can leave an online message for her family.

To leave a condolence, you can first sign into Facebook or fill out the below form with your name and email. [fbl_login_button redirect="https://justenfh.com/obituary/patricia-j-nana-esposito/?modal=light-candle" hide_if_logged="" size="medium" type="login_with" show_face="true"]
×