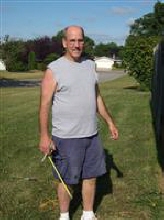 He was born August 9, 1958 in Chicago to John Daniel and Joan (Mitch) Shanahan. On October 21, 1988, he married Kimberley K. Woodman at the First United Methodist Church in Elkhorn, Wisconsin.

Raised in Chicago, he later lived in Rosemont and Des Plaines before becoming a resident of McHenry in 1993. For over 35 years, he was employed as a carpenter, and for the past 24 years, he worked as a carpenter for Phoenix Builders in Rolling Meadows.

During his leisure time, he liked to read, do puzzles, and build things. Other enjoyments included bow hunting during deer season and tending to his vegetable garden. A loving husband and father, Patrick was truly grateful for his friends of Bill W.

For those wishing to send an expression of condolence, his family suggests memorials to the National Kidney Foundation of Illinois, 215 W. Illinois St. #1c, Chicago, IL 60654 or to Misericordia, 6300 N Ridge Ave, Chicago, IL 60660.

To leave a condolence, you can first sign into Facebook or fill out the below form with your name and email. [fbl_login_button redirect="https://justenfh.com/obituary/patrick-jay-shanahan/?modal=light-candle" hide_if_logged="" size="medium" type="login_with" show_face="true"]
×