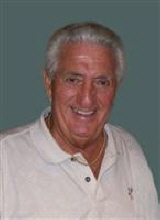 Paul Frank Skittone, age 84, of Naples, Florida and formerly of Arlington Heights, died Monday, August 25, 2014 at his home in Florida.
He was born May 7, 1930 in Chicago to Frank and Josephine (Loverde) Skittone. Paul attended Charles Schurz High School in Chicago, where he met his future wife, Clare. He earned a football scholarship and graduated from Lewis College, where he played football at the position of right guard.
He was drafted into the U.S. Army, and served his country from 1954-56.
Paul began a career spanning over 30 years, beginning in the mailroom for the Chicago Daily News, and working his way up to become Vice President of Advertising for the Chicago Sun-Times. Known by his salespeople as “terror in the aisles”, he was one of the paper’s best ad men in the 50’s, 60’s, 70’s, and 80’s. Paul entertained and made lifelong friendships with numerous clients. A mentor to many, he often took people under his wing to better their careers.
Paul was an avid golfer and a member of the Medinah Country Club for several years, where he started the “AEIOU” golf tournament for American Italians. After retiring to Naples, Florida with his lovely wife, Paul introduced his “AEIOU” tournament to the Classics Country Club at the Lely Resort in Naples, Florida. To this day, it remains the club’s largest annual golf tournament.
Paul was bigger than life, and was loved by every person he ever met.
He is survived by three daughters, Dawn (Bill) Baumgartner of Bemidji, MN, Cheryl (Tony Miletti) Skittone of McHenry, and Jill (Joe) Palese of Lakemoor; two grandchildren, Tony and Billy Baumgartner; and a sister, Rosetta (Dick) Urban.
In addition to his parents, Paul was preceded in death by his beloved wife, Clara, on December 12, 2013; and a grandson, Vinny Dunn.
A memorial gathering of family and friends will be held from noon until the memorial service at 1:15 p.m. Saturday, September 20, 2014, at Justen Funeral Home & Crematory, 3700 W. Charles J. Miller Road, McHenry, IL 60050.
For information, please call the funeral home at 815-385-2400, or visit www.justenfh.com, where friends may leave an on-line condolence message for his family.

To leave a condolence, you can first sign into Facebook or fill out the below form with your name and email. [fbl_login_button redirect="https://justenfh.com/obituary/paul-frank-skittone/?modal=light-candle" hide_if_logged="" size="medium" type="login_with" show_face="true"]
×