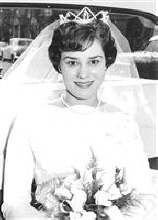 Penney L. Herzmann, age 74, of Johnsburg and formerly of Schaumburg, died on her wedding anniversary on Tuesday, April 14, 2015, at JourneyCare Hospice in Woodstock, surrounded by her loving family.

She was born January 31, 1941 in LaPorte, IN to Fredrick and Ruth Elma (Koepke) Hubner. Penney grew up in LaPorte, and married her husband, Heinz Herzmann in Chicago on April 14, 1962. After their marriage, they made their home in Schaumburg. After living in Schaumburg for over 50 years, she recently moved to Johnsburg to live with her daughter.

A homemaker for most of her lifetime, she also enjoyed working as a receptionist at Roselle Animal Hospital for 20 years. In addition to being fondly remembered for her excellent cooking skills, she was most importantly a loving wife, mother, grandmother, great-grandmother and sister who will be dearly missed.

She was preceded in death by her parents, her sister, Carol, and her brothers, Dave and Frederick Jr.

There will be no visitation. Services were private.

For information, please call Justen Funeral Home & Crematory at 815-385-2400, or visit www.justenfh.com, where friends may leave an on-line condolence message for her family.

To leave a condolence, you can first sign into Facebook or fill out the below form with your name and email. [fbl_login_button redirect="https://justenfh.com/obituary/penney-l-herzmann/?modal=light-candle" hide_if_logged="" size="medium" type="login_with" show_face="true"]
×