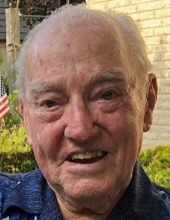 Raymond A. Fitzgerald, age 90, of McHenry, passed away Wednesday, January 23, 2019, at his home. He was born November 19, 1928 in Chicago to Daniel and Nellie (Powers) Fitzgerald. On September 20, 1952, Ray was united in marriage with the love of his life, Geraldine Wolshan.

A veteran of the U.S. Army, he served in the Korean War from February 1951 until his discharge as a Master Sergeant in November of 1952. Ray enjoyed a 30 year career with the Chicago Tribune as stereotyper. After retirement, Ray enjoyed traveling throughout the country with his wife Gerri, in their motorhome. During summers, they loved cruising in their pontoon boat on the Chain O’ Lakes. They also enjoyed escaping Chicago winters at their home in Mesa, Arizona.

Very friendly and thoughtful of others, Ray made many friends in the community, particularly through his memberships at St. Mary’s Church, the McHenry Lions Club, and VFW Post 4600 in McHenry. He enjoyed donating his time helping others and spent countless hours collecting donations on candy day for the Lions Club.

In addition to his parents, Ray was preceded in death by his beloved wife, Gerri, on May 6, 2018.

Visitation will be held from 10:00 a.m. until 11:00 am on Saturday, February 9, 2019 at St. Mary Catholic Church located at 1407 N. Richmond Rd. in McHenry, Illinois, immediately followed by a Mass at 11:00 am. Interment will be at the Abraham Lincoln National Cemetery.

For those wishing to send an expression of condolence, the family recommends a donation in Raymond’s honor to the McHenry’s Lion Club, P.O. Box 292, McHenry, Illinois 60051.

Arrangements were entrusted to Justen Funeral Home and Crematory. For information, please call the funeral home at 815-385-2400, or visit www.justenfh.com, where friends may leave a condolence message for his family.

To leave a condolence, you can first sign into Facebook or fill out the below form with your name and email. [fbl_login_button redirect="https://justenfh.com/obituary/raymond-a-fitzgerald/?modal=light-candle" hide_if_logged="" size="medium" type="login_with" show_face="true"]
×