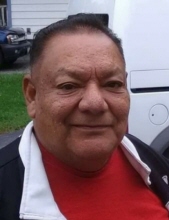 Raymond C. Benavidez Born on June 23, 1947 in Converse, TX. Passed on Wednesday February 13, 2019 in Libertyville, IL. He enjoyed boating, fishing, and Fried Catfish, He loved spending time with family and his friends, When he was younger he loved fast cars, playing his accordion, and loved to sing. Raymond was very outgoing and was always the life of the party. He is survived by his children Gregorio A. Benavidez, Lupe (Alma) Benavidez, Elia Benavidez, Julie A Benavidez, Jeanette A. Benavidez, Raymond Benavidez Jr., Angela D. Melendez. He has 20 Grandchildren, 17 Great Grandchildren, and 12 Siblings Connie, Felix, Rosario, Ricky, Gloria, Angelita, Yolanda, Jessie, Elia, Elda, Elsa, Synthia. He is preceded by his death, of His Father Adolpho (Francis) Benavidez, His mother Josefina (Chepa) Alvarez, and Siblings Victoria Granado, and Jose C. Campa.

To leave a condolence, you can first sign into Facebook or fill out the below form with your name and email. [fbl_login_button redirect="https://justenfh.com/obituary/raymond-c-benavidez/?modal=light-candle" hide_if_logged="" size="medium" type="login_with" show_face="true"]
×