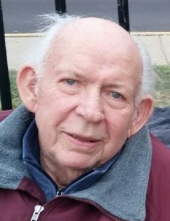 Richard A. Riedel, Jr., age 81, of McHenry, passed away on April 1, 2019 at JourneyCare – Woodstock after a long courageous fight against cancer. He was born on June 23, 1937 to Richard and Elizabeth (Rode) Riedel, Sr. in Chicago. Richard was united in marriage to Kathy Rieck on December 3, 1960.

By trade, Richard was a brick mason and owned his own construction company, Riedel Construction, for over 20 years. A car enthusiast, Richard was a fan of street rods and joked that his 46 Ford street rod was his 5th child. As an honorary “Tire Engineer” on his son-in-law’s sports car racing team, Richard went to races all over the country and was a member of the Midwest Street Rod Association.

In his leisure time, Richard enjoyed bowling, golf, and fishing. He was a proud grandfather who deeply enjoyed time spent with his grandchildren. Richard was a kind man who very easy to talk to and his family will treasure the conversations and wisdom imparted by Richard for years to come.

In addition to his parents, Richard was preceded in death by his brother, Kenneth Riedel.

For those wishing to send an expression of condolence, the family suggests memorials to the American Cancer Society at 1801 S. Meyers Road Ste. 100, Oakbrook Terrace, IL 60181.

For more information, please call the funeral home at 815-385-2400 or visit www.justenfh.com, where friends and loved ones can share memories on Richard’s Tribute Wall.

To leave a condolence, you can first sign into Facebook or fill out the below form with your name and email. [fbl_login_button redirect="https://justenfh.com/obituary/richard-a-riedel-jr/?modal=light-candle" hide_if_logged="" size="medium" type="login_with" show_face="true"]
×