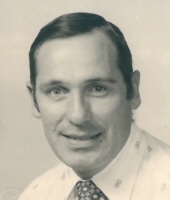 Richard J. Lay, age 86, of McHenry, formerly of Northbrook, passed away peacefully Sunday, October 29, 2017 at his home with his family by his side. Richard and his twin brother, John III, who died at birth, were born in Evanston, IL to John Jr. And Marion (Lamb) Lay on May 18, 1931. On May 25, 1963, he married the love of his life, Elisabeth Anetsberger in St. Norbert Catholic Church in Northbrook.

Richard spent the first nine years of his life in Chicago, before his family moved to Northbrook in 1940. He was a proud veteran of the US Army, he served in the Army National Security Agency from 1951 to 1954, and then transferred to inactive reserves until honorably discharged in 1969. Richard received the Domain of the Golden Dragon, Ruler of the 180th Meridian Certificate, which was given to soldiers crossing the 180th Meridian, also known as the International Date Line on the USNS General Nelson M. Walker Ship.

Richard graduated from the University of Illinois with a BS Engineering Degree in 1959. He then started his lifelong career as an engineer with Chicago Aerial Industries Recon/Optical, and retired in 1999. Richard was a devoted husband, loving father, doting grandfather, and caring brother, who will be missed and forever in our hearts.

Richard was preceded in death by his parents and his twin brother John III.

The cremation rite was accorded privately. Inurnment will be private.

Arrangements were entrusted to Justen Funeral Home & Crematory. For information, please call the funeral home at 815-385-2400, or visit www.justenfh.com where friends may leave an on-line condolence message for Richard’s family.

To leave a condolence, you can first sign into Facebook or fill out the below form with your name and email. [fbl_login_button redirect="https://justenfh.com/obituary/richard-j-lay/?modal=light-candle" hide_if_logged="" size="medium" type="login_with" show_face="true"]
×