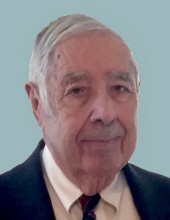 He enlisted in the Illinois Air National Guard. His unit was activated and he was stationed at the U.S. Air Force Base in Langley, Virginia. He was a gunner and an instructor in the 108th Bomb Squadron until 1952. After serving, he attended the John Marshall Law School, received his law degree, and was admitted to the Illinois and Federal Bar in 1957. In 1960, he received a Doctor of Jurisprudence degree.

Richard was a hardworking attorney for over sixty years. First in Chicago, and then in McHenry County. In 1960, Richard was appointed to the Cook County Board of Tax Appeals and in 1961, he was appointed as Technical Advisor to the Illinois Department of Revenue. He represented the State of Illinois and gained national prominence as an authority on state and local tax law and later served as an Assistant Attorney General.

In his leisure time, Richard was an avid boater. He held a US Coast Guard License and was always ready to take the boat out onto the water. Richard also enjoyed seeing his grandchildren and cheering on the Chicago Bears. Additionally, he enjoyed winter vacations in Naples and Marco Island, Florida.

He was preceded in death by his parents and his two sisters, Jeanne Hill, Marianne Mazzuca; and his beloved son-in-law, Patrick Rorig.

Interment will be at St. John the Baptist Cemetery.

For those wishing to send an expression of condolence, memorials should be directed to St. John the Baptist Catholic Church.

For information, please call 815-385-2400, or visit www.justenfh.com, where friends may leave an on-line condolence message for Richard’s family.

To leave a condolence, you can first sign into Facebook or fill out the below form with your name and email. [fbl_login_button redirect="https://justenfh.com/obituary/richard-j-short/?modal=light-candle" hide_if_logged="" size="medium" type="login_with" show_face="true"]
×