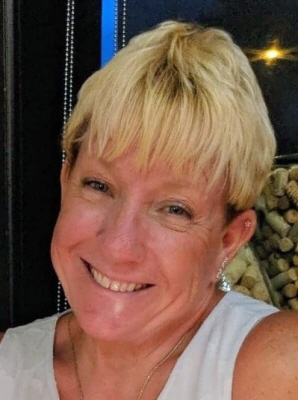 The family of Robbin Marie (Radtke) Pierce is saddened to announce the sudden passing of their wife, mother, grammie, sister, and friend. She passed away July 28th, 2020 at Northwestern Memorial Hospital in Chicago, just days before her 62nd birthday. Ironically, this bright, witty, sharp-as-a-tack woman succumbed to complications following a ruptured aneurysm of the brain.

Robbin was born in Waukegan, Illinois at St. Therese’s Hospital in July of 1958. She was the third oldest child of the Radtke clan, raised by Richard and Ann Radtke in the neighborly village of Johnsburg, Illinois. She attended St. John’s Grade School and graduated from Marian Central Catholic High School, where she was a pommie and “band geek” with aspirations to be a music teacher, but the universe had other plans for her. She met the love of her life, Chip, at a school jazz festival. They married in April of 1976 and started a family immediately with daughter Krysten, and sons Jacob and Sam were added soon after.

As a young mother in 1980, Robbin decided to try her hand at driving a school bus. She joined Johnsburg School District 12 and, putting her love of music to a new and unexpected use, quickly became known as Robbin – the cute, blonde, smiley, singing bus driver. Multiple generations of Johnsburg families rode her bus, and she was loved by children and parents alike. It would be no surprise if most of the kids who rode with her still remember the lyrics to “Do Wah Diddy Diddy” as adults. When after many years behind the wheel she was called to lead the pack as Director of Transportation, following in the footsteps of her mother “Mrs. Radtke,” she became known simply as Robbin the Bus Lady. Robbin was a human computer; you could mention a kid’s name and she knew where they lived, what bus they rode, and who their driver was without looking it up. Robbin took pride in her career and gave the families of Johnsburg her best until her retirement in June of 2019.

When not on a school bus, she enjoyed attending her kids’ sports and band events, coached her sons’ Little League and baseball teams, and drew on her experience with dog obedience to assist her daughter’s 4H group. Part of Robbin’s heart still resides at Lucky-E Kennel in Ringwood, where she worked as an instructor for over 30 years, leading the puppy classes, basic obedience, and agility.

Arrangements are being handled by Justen Funeral Home and Crematory in McHenry, Illinois. Unfortunately, due to COVID restrictions there will be no public viewing or visitation.

To leave a condolence, you can first sign into Facebook or fill out the below form with your name and email. [fbl_login_button redirect="https://justenfh.com/obituary/robbin-marie-pierce/?modal=light-candle" hide_if_logged="" size="medium" type="login_with" show_face="true"]
×