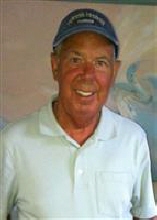 He was born July 9, 1948 in Chicago to Arthur and Mary (LaGiovine) Beck. Raised and educated in Chicago, Bob moved to Round Lake in 1971 before living for a time in the Ingleside area. More recently, he lived for over 20 years in McHenry before residing in Melbourne for the past three years.

Bob was an avid golfer. Also a sports fan, he enthusiastically followed the White Sox and Chicago Bears. Bob loved his children, and especially enjoyed watching his grandsons play sports. He believed in living life to its fullest, and enjoyed the past few years in Florida, where he was especially fond of the warm weather, beach, and ocean.

In addition to his parents, he was preceded in death by a sister, Beverly “Babs” Finnegan.

To leave a condolence, you can first sign into Facebook or fill out the below form with your name and email. [fbl_login_button redirect="https://justenfh.com/obituary/robert-a-39bob39-beck/?modal=light-candle" hide_if_logged="" size="medium" type="login_with" show_face="true"]
×