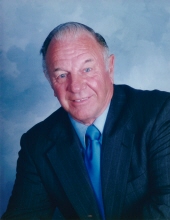 Bob proudly served our country in the United States Navy. Before residing in Fort Atkinson, Bob was a long time resident of McHenry, Illinois, where he was a Union Electrician for Carey Electric for over 35 years. After retiring from Carey Electric, he began farming as his full time passion in Wisconsin. He was a charter member of the McHenry Area Rescue Squad and enjoyed golfing at the McHenry Country Club. Bob furthered his passion for golf at Spring Creek Golf Course in Cold Spring, Wis., where he proudly golfed 4 holes-in-one in his lifetime. When Bob was not golfing, he enjoyed life bowling and cruising with Carnival Cruises as a V.I.P., and enjoyed winters in Florida.

For those wishing to send an expression of condolence, his family suggests memorials in Bob’s name be made to Rainbow Hospice, 147 W. Rockwell Street, Jefferson, WI 53549.
Arrangements were entrusted to Justen Funeral Home & Crematory, 3700 W. Charles J. Miller Road, McHenry, IL 60050. For information, please call the funeral home at 815-385-2400, or visit www.justenfh.com, where friends may leave an on-line condolence message for Bob’s family.

Bob’s family wishes to extend its heartfelt thanks to Rainbow Hospice of Jefferson, especially that of nurses Sarah and Nicole, and all the certified nursing assistants who helped tremendously in their care for Bob.

To leave a condolence, you can first sign into Facebook or fill out the below form with your name and email. [fbl_login_button redirect="https://justenfh.com/obituary/robert-g-bob-schmaling/?modal=light-candle" hide_if_logged="" size="medium" type="login_with" show_face="true"]
×