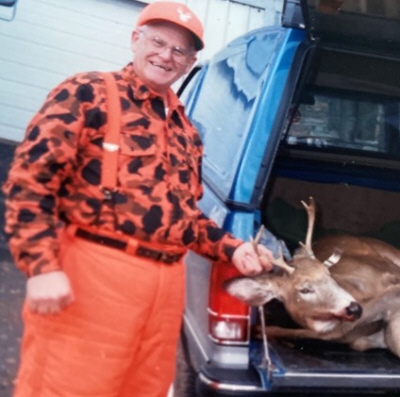 Robert George Schlachter, age 82, of Grayslake, Illinois, passed away on September 17, 2020, at Home. He was born on September 20, 1937, to Henry and Marie (Hall) Schlachter in Port Jefferson, NY. On October 24, 1958, he was united in marriage to Marilyn Sweezy in Washington, DC.

Robert owned and operated a Shell Gas Station for 10 years in Ridge, NY then moved to Prompton, PA where he owned and operated his own automotive parts distribution business called SAPCO (Schlachter’s Auto Parts Company). He was an avid Hunting and Fishing enthusiast.

Arrangements have been entrusted to Justen’s Round Lake Funeral Home. For information, please call the funeral home at 847-546-3300 or visit www.justenfh.com, where friends and loved ones may share memories of Robert on his tribute wall.

To leave a condolence, you can first sign into Facebook or fill out the below form with your name and email. [fbl_login_button redirect="https://justenfh.com/obituary/robert-george-schlachter/?modal=light-candle" hide_if_logged="" size="medium" type="login_with" show_face="true"]
×