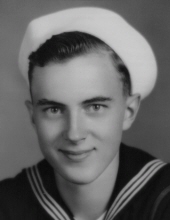 A lifetime resident of McHenry, Bob graduated from McHenry High School. He enlisted in the United States Navy and proudly served his country as a Machinist Mate 3rd Class aboard the USS Whitehall during World War II. After completing his Navy enlistment, Bob attended Rockford College and earned his degree in Accounting. He began his career at Al Noonin Tax Service on Riverside Drive in McHenry, followed by Gearmaster of McHenry. Bob finished his career with McHenry Savings Bank on Green Street in McHenry, where he was employed until his retirement at age 70.

Bob was a member of the American Legion Post 491 in McHenry, and was a founding member of the McHenry Rotary Club at its inception on April 22, 1955. He achieved a perfect record of never missing a meeting in his 63-year tenure as a McHenry Rotarian. A man of deep faith, Bob was a devoted member of St. Mary’s Catholic Church in McHenry. Also a member of the Catholic Order of Foresters, Court #594, Bob was honored by the organization and received a pin commemorating 75 years of membership.

In his leisure time, he was an avid gardener, enjoyed the calm of fishing, and was a diehard Chicago Cubs fan. He lived an exceptionally full life and will be remembered by all who knew him as a hardworking man with a great sense of humor.

In addition to his parents, Bob was preceded in death by his siblings, Betty Piagentini and Raymond Blake.

For those wishing to send an expression of condolence, memorials in Bob’s name can be sent to the Rotary Club of McHenry Charitable Foundation, Inc. at P.O. Box 28, McHenry, IL 60051 or to St. Mary’s Catholic Church at 1403 N. Richmond Road, McHenry, IL 60050.

For information, please call the funeral home at 815-385-2400, or visit the website at www.justenfh.com, where friends may leave an on-line condolence message for his family.

To leave a condolence, you can first sign into Facebook or fill out the below form with your name and email. [fbl_login_button redirect="https://justenfh.com/obituary/robert-p-bob-blake/?modal=light-candle" hide_if_logged="" size="medium" type="login_with" show_face="true"]
×