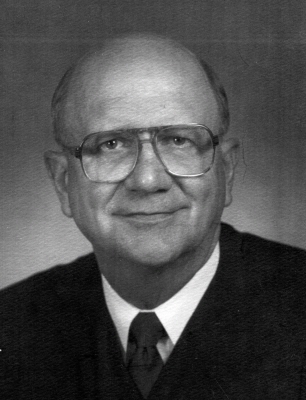 Roland Arthur Herrmann, 89, died on May 5th in Green Valley, Arizona, after a lengthy illness. A Green Valley resident for over 30 years, Roland was born in Carroll, Iowa, the 11th of 13 children born to the Reverend Rudolf and Louise Paul Herrmann. Roland attended Immanuel Lutheran School in Lidderdale, Iowa, and graduated from Carroll High School in 1948.

Roland received his BA and JD degrees from Valparaiso University in 1957. He was honored to have been a Circuit Court Judge for the 19th Judicial Circuit in Lake and McHenry Counties, Illinois from 1975 – 1991. He was dedicated to being fair but firm. He was admitted to the Illinois Supreme Court in 1951, U.S. Supreme Court in 1970, Circuit Court of Appeals in 1966, and U.S. District Court – Northern Illinois in 1960. In 1976, he was a graduate of the National Judicial College, University of Nevada-Reno.

For many years, Roland and his family resided in McHenry, Illinois. He was a Past President of the Kiwanis Club, Paul Harris Fellow of the Rotary Club, a board member of the Lake Region YMCA, and a past Chairman of Zion Lutheran Church in McHenry. For many years he enjoyed playing golf at the McHenry Country Club.

Roland was proud of his service in the United States Army during the Korean War and belonged to the American Legion Post 66.

Roland enjoyed many years of retirement in Green Valley. He and Fran lived in Desert Ridge for seventeen years and they both played golf at the Desert Hills Golf Club. For the past nine years they were comfortable in apartment-living at La Posada. He was a faithful member of the Lutheran Church of the Risen Savior.

He was preceded in death by his parents, his brothers, Ted, Paul, Ken, Edgar, Victor, Waldo and Theodore, and sisters, Lois, Eunice and Doris.

In lieu of flowers, the family gratefully requests that memorials be sent to Valparaiso University to support the men’s basketball and baseball programs. Donations can be mailed to Valparaiso University, Office of Advancement, 1100 Campus Drive South, Valparaiso, IN 46383, or you may donate online at give.valpo.edu. Please designate the gifts to men’s basketball or baseball and indicate that the gift is in memory of Roland Herrmann on the memo line of your check or in the special instructions area of the online giving form. Or, if you would rather, please donate to The Rev. Rudolf Herrmann Scholarship Fund account#45381 at Concordia Seminary, 801 Seminary Place, St. Louis, Missouri 632105-3196.

There is a video slide show available on Roland’s tribute wall on this website as well.

To leave a condolence, you can first sign into Facebook or fill out the below form with your name and email. [fbl_login_button redirect="https://justenfh.com/obituary/roland-arthur-herrmann/?modal=light-candle" hide_if_logged="" size="medium" type="login_with" show_face="true"]
×