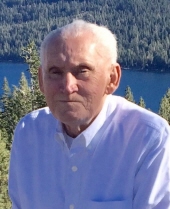 Royce R. Osborne, age 79, passed away peacefully on Monday, October 30, 2017, at his home in Woodstock with his best friend and wife, Nancy, at his side.

He was born October 30, 1938 in Cedar Rapids IA, the son of Clarence and Marie (Mettler) Osborne. On October 12, 2002, he married Nancy Hiatt in Indianapolis IN. Their relationship spanned 21 years.

Royce was employed by the Champion Company in Houston TX for many years and retired in 2002. In his retirement, he enjoyed traveling throughout the United States, fishing, puzzling, and working part-time (when the mood struck him!).

He was a Friend of Bill W. for over 33 years and was very active in groups that espoused Bill’s philosophies. He particularly loved the Serenity Prayer: “God, grant me the Serenity to accept the things I cannot change, Courage to change the things I can and Wisdom to know the difference.”

He was preceded in death by his parents, his sister, Jean Northrup, and his brother, Leland Osborne.

Memorials in Royce’s name may be directed to Villa Desiderata Retreat House or Home of the Sparrow, both located in McHenry IL.

Arrangements were entrusted to Justen Funeral Home & Crematory. For information, please call 815-385-2400, or visit www.justenfh.com, where friends may leave an on-line condolence message for his family.

To leave a condolence, you can first sign into Facebook or fill out the below form with your name and email. [fbl_login_button redirect="https://justenfh.com/obituary/royce-r-osborne/?modal=light-candle" hide_if_logged="" size="medium" type="login_with" show_face="true"]
×