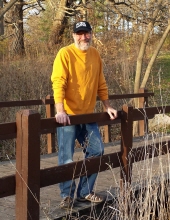 The family of Scott C. Pannier, age 59 of Wonder Lake, IL announce the heartbreaking loss of the man with the biggest heart of us all. Scott lived brightly and fully with Stage IV Lung Cancer for three years, far outliving medical expectancy for someone with even a lesser stage of disease. After a rapid decline due to the rigors of treating the receding cancer, Scott was moved to JourneyCare of Barrington. There, while surrounded by peace, fresh air, and the enormous love of his close family and friends, including his faithful cat, Tubby laying on his feet, he left his human vessel behind on Sunday August 25, 2019.

Scott was firstborn child to Richard and Elizabeth (Smith) Pannier, on December 16, 1959 in Pittsburgh, PA.He charmed everyone from the beginning with a huge grin that lit up any room. He became a big brother soon and took that role seriously for a lifetime to his three well loved siblings. Scott was smart and precocious, with an insatiable curiosity. He learned to both talk and read at a very young age, reading everything he could find; and mastered almost anything put in front of him that he could experience with his hands and mind. He always loved the outdoors, running whenever he could throughout his childhood and in high school track and cross country teams. He began studying stringed instruments in fourth grade. He learned bass viol, cello and string bass; and played in orchestras and jazz bands throughout his college days. Scott possessed a natural sensitivity and empathy toward pets and people alike; from his first favorite kitty, Fluffy, to playmates to siblings to strangers. He made friends easily, with a light, gentle spirit that put people at ease. He was truly born with a gift of humor and of helping with a wide open heart.

Scott’s uncanny ability to talk to anyone, put people at ease, and turn strangers into friends was instrumental in meeting the love of his life, Lori Ann Campbell, at Illinois Wesleyan University, where they both studied Theatre Arts. His light, gentle kindness coaxed her from her introversion and won her trust and love. They married in Columbus, IN on July 17, 1982. While working in Theatre they adventured from Illinois, to Missouri, to Nebraska, Santa Fe and Cincinnati, even some solo trips for Scott to Germany, installing sound systems in cruise ships. Their greatest adventure was returning to Illinois, where Scott worked for a woodworking company and honed his craftsmanship, satisfying a need in him to make things of lasting beauty with his strong, gifted hands. He loved his work and his work ethic was beyond reproach. If he built it or installed it, you could be sure it would be perfect and would last a lifetime. It was here that Scott and Lori Ann began growing their family, with son, Colin in 1990 and daughter, Emma in 1996. He took his role as provider very seriously, working harder than most, even far into his cancer treatment. He was forced to leave a few companies over the years for one reason or another, but each time he secured another job by end of day simply by picking up the phone and reaching out to the many colleagues whom he had befriended, and who respected his work and character enough to offer work on the spot. He was rarely sick, able to work through exhaustion to make deadlines and could outwork or outplay people half his age; “tougher than dirt” as he liked to say.

The adventure of Fatherhood was one of Scott’s greatest joys. His intense curiosity about EVERYTHING made him the perfect adventure guide for his family. His children cherish the camping and canoeing, hiking, and trips to zoos where he would read (or recite from his encyclopedic mind) every imaginable detail about every animal. Road trips, especially to Madison and an entire network of friends playing games in the woods, are cherished bonding experiences; as are train museums and midnight train rides, late night pie dates, counting Dad’s boo-boos at work day’s end, and “dancing like Dad in the car.” Even trips to the local library were adventurous, often ending with Scott falling asleep in a chair as he tried to read every current magazine issue available.

Scott was an avid lifetime reader, perhaps reading as many books in a week as an average person reads in a year or a lifetime. He truly read anything from Classics to trashy Romance Westerns to science reports to How-To books. He read about every subject imaginable, and his mind was a catalog of useful and useless information, which he would share with family, friends, and strangers in a story beginning with, “I just read an article about…” His vast knowledge and intuitive grasp of how things work made him an invaluable resource for friends and family who needed help with a fallen shelf, or a sticking door, or replacing a faucet. He never met a toilet he couldn’t pull and replace! He helped willingly and joyfully, simply because he loved so completely that the task was just a means to show love and share life.

Scott was a man with an enormous heart and brilliant mind; simple needs but vast and eclectic taste in art and music and conversational topics. He loved and was loved by all children, kitties and dogs, caring for them all as his own. He shared life freely with all, accepting each new person into his family and circle of friends. His laughter was unbridled and contagious. He will be sorely missed and the world is dimmer in the absence of his bright light.

Memorial Gifts to the following organizations will honor Scott’s heart:

Please reference in memory of Scott Pannier and designation to “Big Woods Memorial.”

Arrangements were entrusted to Justen’s Wonder Lake Funeral Home. For more information, please call the funeral home at 815-728-0233, or visit www.justenfh.com, where friends may leave an on-line condolence message for Scott’s family.

To leave a condolence, you can first sign into Facebook or fill out the below form with your name and email. [fbl_login_button redirect="https://justenfh.com/obituary/scott-c-pannier/?modal=light-candle" hide_if_logged="" size="medium" type="login_with" show_face="true"]
×