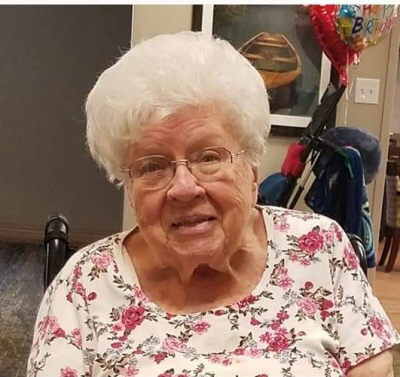 Shirley Annette (Dosch) Rasmussen, 95, of Wauconda, IL. passed away on May 4, 2020 at Accord Hospice at Wauconda Care.

She married Raymond Albert Rasmussen in Chicago on December 15, 1945.

Shirley worked for and retired from the Jewel food store in Crystal Lake, IL. She loved snowmobiling, gardening, square dancing, painting, and spending time with her family and friends.

Shirley and Raymond retired to their summer home in Woodruff, Wisconsin, where they were both very active in their church and community. Shirley was a Eucharistic minister for the Holy Apostle Church and the Howard Young Hospital in Woodruff. She was also a columnist for the newspaper in town. She and Raymond helped start the Senior Center in Woodruff as well.

She was preceded in death by her parents Harold and Annette Dosch, her husband Raymond, her sister Glori Schramm, sister-in-laws Doris Drollinger and Janet Heinicke, brother-in-laws Richard Drollinger and Robert Heinicke and her daughter in law, Kathleen Rasmussen.

A celebration of her life will be held at a later date.

Arrangements were entrusted to Justen Funeral Home & Crematory in McHenry. For information, please call the funeral home at 815-385-2400, or visit www.justenfh.com, where friends and loved ones may share memories of Shirley on her tribute wall.

To leave a condolence, you can first sign into Facebook or fill out the below form with your name and email. [fbl_login_button redirect="https://justenfh.com/obituary/shirley-annette-rasmussen/?modal=light-candle" hide_if_logged="" size="medium" type="login_with" show_face="true"]
×