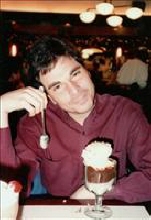 Vincent Gordon Egarian, 48, of Lake in the Hills, IL died on January 28, 2009, ending his heroic 14 year battle with the debilitating consequences of a stroke. A native of Bronx, New York, and ever a New Yorker at heart, Vincent was born on October 22nd, 1960, the first son of Zareh and Rose (Kardashian) Egarian.   Vincent showed us what a person can do when challenged with something he did not know to be impossible. As a teenage volunteer for the New York Museum of Broadcasting, he pieced together from its thousands of pieces a shattered glass master of the only surviving radio recording of the Japanese bombing of Pearl Harbor. His keen mind and creative eye gave us early animated commercials, the StarRider video arcade game, a year’s worth of graphic introductions for Saturday Night Live, and a world-class marketing database tool used by the largest software companies.   Vincent gave in life much more than he received.  Declared brain-dead by his team of doctors, he awakened from a four-month coma and successfully fought to resume a productive and rewarding life.  He remained an avid trader of old-time radio and classic TV. As a toy collector and a humorous writer he helped us find our inner child and taught us the value of nurturing it. From a wheelchair, typing with one hand and legally blind, he remixed perfect audio and created artwork for 34 eclectic themed mix CD’s as gifts for his friends and family.  His painstaking work and unique wit have been an inspiration and joy to friends across the country, some who only knew him via electronic communication and never imagined his disability.   Vincent is survived by fiancée Susan Adelmann; mother Rose Egarian, brother Steven and wife Bonny Egarian, nephew Taylor Egarian, and a loving extended east coast family; his Illinois family John and Jeanne Adelmann, Sharon and Nate Kostal family, S. John and T.H. Adelmann family, and dear family friend, Henry Harper.   Vincent’s spirit shines forever in the many, many friends and lives he has touched, inspiring all who had the pleasure to know him with his imagination, creativity, laughter, and his undeterred spirit to live fully no matter what his circumstance.    In lieu of a service, it is Vincent’s wish that donations be made to support the Make-a-Wish Foundation,  http://www.wish.org.  Online memories are welcome and may be shared at  www.justenfh.com (click “send an online condolence”).

To leave a condolence, you can first sign into Facebook or fill out the below form with your name and email. [fbl_login_button redirect="https://justenfh.com/obituary/vincent-gordon-egarian/?modal=light-candle" hide_if_logged="" size="medium" type="login_with" show_face="true"]
×