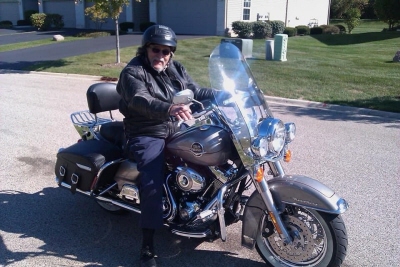 Vito Andrea Racanelli, age 76, of Woodstock, IL passed away on Sunday, September 19, 2021, with his loving wife by his side. He was born on April 6, 1945, in Chicago, IL to Vito Racanelli and Lucille Gianfrancesco. Vito married his first wife in 1967, Wanda Lee Racanelli (Roberts), with whom he had three children and was happily married until her passing in 2005. Vito married his best friend and love Maxine Sinnott on June 18, 2010, in Estes Park, CO, and they have been happily married for 11 years.

Vito has owned a local optometry practice that he opened in 1989. He was proud the business was family owned and was able to serve the communities of Johnsburg and McHenry. The majority of Vito’s practice consisted of special needs children, and he volunteered many hours to Northern Illinois Special Recreation Association (NISRA) providing eye examinations and care. During summer vacation, Vito enjoyed teaching blind children to water ski. In the early 1990’s he participated in creating the Jay Hawks, a pee wee football league, coached youth football in Fox Lake which inspired children and adults to be better and do better by each other. Vito enjoyed motorcycling and used this past time serving 25 years as the Chicagoland Task Force Leader of the Pediatric Brain Tumor Foundation’s, Ride for Kids, raising money for research into childhood brain cancer. Vito served as president of the Italian American for Western Lake County and was an enthusiastic member of several motorcycle clubs. He has owned a few beauties including a Harley, a Gold Wing and a Chopper that he and some friends assembled in the garage, that would make any young man jealous. He has also ridden to raise awareness for the National Veterans’ Awareness Ride (NVAR), traveling cross country with rolling thunder, stopping at Veteran’s hospitals, and nursing homes along the way. In addition, he volunteered in the Vision Department of Hines Veteran hospital. Vito was known as warm, loving, and compassionate. He had a huge heart and love for kids. He was active, eager to help, and a great family man. He never met a stranger because strangers are only undiscovered friends.

A Celebration of Life will follow on Saturday, September 25, 2021 from 5pm to close at the Johnsburg Community Club, 2315 Church Street, Johnsburg, Ilinois. Italian food will be provided.

For information, please call the funeral home at 815-385-2400 or visit www.justenfh.com, where friends and loved ones may share memories of Vito on his tribute wall.