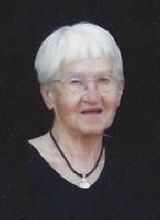 Vivian Bertha “B” Loehde, age 88, recently of Johnsburg and also Fox Point Manor in McHenry, entered eternal life Thursday morning, July 2, 2015, in the loving and comforting care of family and JourneyCare Hospice.
Bertha was born January 3, 1927 in Ishpeming, Michigan, and was the daughter of John and Martha (Wajanen) Johnson. She lived in Ishpeming and attended Ishpeming High School, where she enjoyed business classes and Glee club, graduating as valedictorian of her class.
On October 17, 1959, Vivian married Harry Frederick “Fred” Loehde. They made a home and raised their daughter in Marquette, MI, where they lived for more than 50 years. Vivian worked at the Miner’s National Bank for many years, and then joined Fred at Spear and Son’s as a business manager. She retired in 1989. Bertha and Fred enjoyed traveling all over the country to visit their daughter at various places she resided, and even made two enjoyable trips to Hawaii.
Vivian’s true passion was in volunteering. She spent over 30 years volunteering at St. Paul’s Episcopal Church and Marquette General Hospital. She spent her free time enjoying long walks around Marquette, and the beaches of Lake Superior.
Survivors include her daughter Julie (David) Thomson of Johnsburg; three grandchildren, Tavis Thomson of Columbus, OH, Kirsten Thomson of Orlando, FL, and Shae Thomson of Johnsburg; two brothers-in-law, Robert (Mary) Schwenke of Negaunee and Richard (Paula) Schwenke of Marquette; niece, Mary Grobar of Negaunee, and many other nieces and nephews.
Vivian was preceded in death by her husband, Fred Loehde; her father and mother, John and Martha Johnson; and her sisters, Ruth Garceau, Gertrude Spengler and Irene Johnson.
Family will receive relatives and friends at St. Paul’s Episcopal Church, 3706 W. St. Paul’s Avenue, McHenry, IL 60050 on Tuesday, July 14th, at 6 PM, with Rev. Lori Lowe, pastor, officiating. Inurnment will be made in the church columbarium.
Memorials may be directed to St. Paul’s Episcopal Church, 3706 West St. Paul Ave, McHenry, IL 60050.
Arrangements were entrusted to Justen Funeral Home & Crematory, 3700 W. Charles J. Miller Road, McHenry, IL.   For information, please call the funeral home at 815-385-2400, or visit www.justenfh.com, where friends may leave an on-line condolence message for her family.