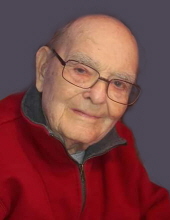 Walter N. Herrmann, age 100, recently of Wonder Lake, IL and a longtime resident of Fort Atkinson, WI, passed away on Friday, March 29, 2019 in Wonder Lake. Walt was born on December 13, 1918 to Joseph N. and Emily (Gleixner) Herrmann in Chicago.

Walt enlisted in the United States Army Air Corps in April of 1942. He was assigned to flight status as a radar instructor, teaching air crews with 316th Troop Carrier Group. Walt was honorably discharged in March of 1945 and remained a proud WWII veteran throughout his lifetime.

He married the love of his life, Roberta Lee Wigginton on April 4, 1953 in Evanston, IL. The couple renewed their wedding vows at St. James Catholic Church in Arlington Heights, IL on July 25, 1970.

By trade, Walt worked as a purchasing agent for dairy equipment manufacturing. Over the span of his 41-year career, he was employed by AVP Crepaco in Chicago, IL, Arlington Heights, IL, and Lake Mills, WI.  At the time of his retirement, Walt held the position of Development Engineering Coordinator.

Walt was a long- time member of St. Joseph Catholic Church of Fort Atkinson. Because of his deep Catholic devotion, he practiced his faith by helping others through the Fr. Alfred P. Endres Knights of Columbus Council 3396, Men’s Club, as well as the Ushers Group. Other volunteering included serving on the Board of Directors for the Fort Atkinson Lions Club, Vice President of the Fort Atkinson Food Pantry, as well as a driver for the “Meals on Wheels” program. At Christ the King Church he joined the Bible Study group and made a positive impact on everyone he met and was always a true gentleman and friend.

Because of his love of flying, Walt obtained a Commercial Pilot license in February of 1949 and found deep joy in flying throughout his life. Walt also treasured time spent traveling with his wife and family at home and abroad. A favorite hobby of his, he enjoyed model railroading. He was a long time fan of the Chicago Bears and Blackhawks, and Cubs, rarely missing a game!

In addition to his parents, Walt was preceded in death by his cherished wife, Roberta, on March 12, 2013; a brother and three sisters.

For those wishing to send an expression of condolence, Walt’s family suggests memorials in his honor be directed to Catholic Charities.

For more information, please call the funeral home at 815-728-0233, or visit www.justenfh.com, where friends and loved ones may share a memory on Walt’s Tribute Wall.

To leave a condolence, you can first sign into Facebook or fill out the below form with your name and email. [fbl_login_button redirect="https://justenfh.com/obituary/walter-n-herrmann/?modal=light-candle" hide_if_logged="" size="medium" type="login_with" show_face="true"]
×